LoopUp earnings up 150% in maiden interims

LOOP reported significant growth in revenue, gross profit, and EBITDA for the first half of the year

Global Saas company LoopUp Group (LSE: LOOP), announced this morning that it has performed strongly in the first six months of the year with revenue and profit both increasing more than 30%.

The results will be welcomed by investors and will be a further positive step for the company who completed its successful £8.5m placing on AIM in August this year. 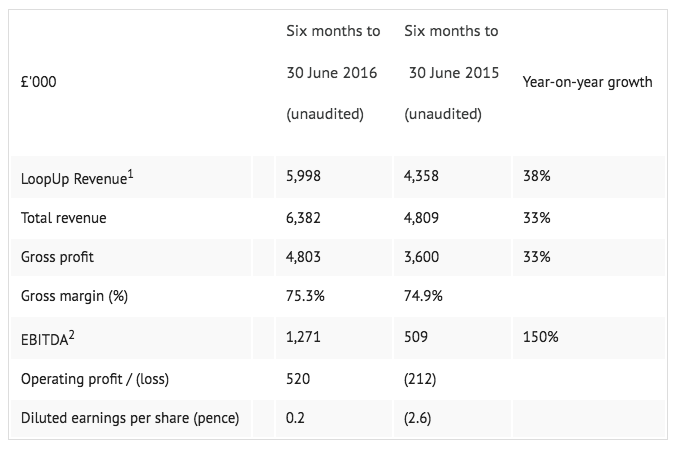 "LoopUp develops conference-calling SaaS products for remote meetings. Its patented software guarantees ease of use, and its scalable model addresses a £4.7bn market in which it has grown revenues by 36% CAGR since 2013. It has been EBITDA profitable since Q4’13 and serves 1,850+ customers."

Co-CEO Steve Flavell said management were very pleased with the company's first set of interims as a public company, and said H2 had started encouragingly, too:

"The 38% growth in LoopUp Revenue has exceeded FY2014 and FY2015 growth rates, gross margins have improved, the business was profitable at an operating level, and all key underlying business metrics have remained positive. Our successful IPO on the AIM market ... significantly strengthened our balance sheet and enables us to pursue our growth strategies to expand our proven distribution model…

... While second half profitability will be moderated by planned investments in growth, we remain confident in meeting full year revenue and profit expectations as well as our ability to deliver future growth."


The results show improving momentum and improving margins which is very encouraging at this stage. The group is sitting on net cash and has achieved a nice swing from loss to profit. However, it is still early days given this is the first results as a public company so we will look for this momentum to continue.

LoopUp to beat EBITDA forecast by 3%