Each month, Northland Capital Partners publishes the Aim Journal, a 12 page report looking at the most successful growth market in the world, the FTSE All-Share-Index (AIM). It explores current themes, news, as well as exploring the current performance of a selection of constituent companies.

Here is an extract from the report focusing on the increased trading activity on the AIM market after Brexit.

New entrants may have been made more cautious about joining AIM but the vote to leave the EU sparked an upturn in trading levels on the junior market.

Trading on AIM has increased following the EU referendum, having reached the peak for the year on the day after the vote. June and July are normally quieter months in terms of trading but trading levels remain higher than they generally are at this time of year.

The average number of daily trades during June was 22,904. The average number of trades for the last five days of June was 32,510 a day. The July average was 24,439 a day and this compares with 22,985 trades a day on average in March – the spring can tend to be the peak trading period in most years.

The number of companies on AIM has declined from 1,293 to 1,010 since the end of 2009. This means that the number of trades per company has risen sharply, although trades are still dominated by a small number of the larger companies.

Online fashion retailer ASOS accounted for one-fifth of the trading volume and just under 15% of trades in July, which was slightly lower than levels in June. This reflects the strong liquidity in the shares, making them more readily tradeable than many much smaller AIM companies.

Trading values are nowhere near their previous peaks. On 24 June there was £169.5bn-worth of shares traded and this was surpassed on 23 July with a traded daily value of £183.7bn. The average for the year so far is £114.3m.

There are normally between 2,000 and 3,000 monthly trades in recruitment and training company Staffline but this rose to 3,192 in June and 5,954 in July. This reflects concerns about the company’s reliance on free movement in the EU. Although there was a sharp share price fall, there was a subsequent recovery following strong trading news.

More surprisingly, the mining sub-sector increased its share of AIM trades from 9% in May to 10.5% in July. The average for the year as a whole is 8%.

The FTSE AIM All Share index has risen by 4% since the day before the EU referendum. After the two most active days of trading the index was 7% lower, so this represents a strong recovery since then, and it is still based on significant trading volumes and not on limited liquidity.

It may be difficult to maintain this level of liquidity during August but it will be interesting to observe how well it does hold up. There are signs of new entrants braving a flotation on AIM, including Italy-based PR firm SEC and Franchise Brands (see page 2).

The outlook for AIM shares remains uncertain. Many companies have not been hampered by the apparent lack of con dence in the UK economy, while others are more cautious although that caution may be overdone. 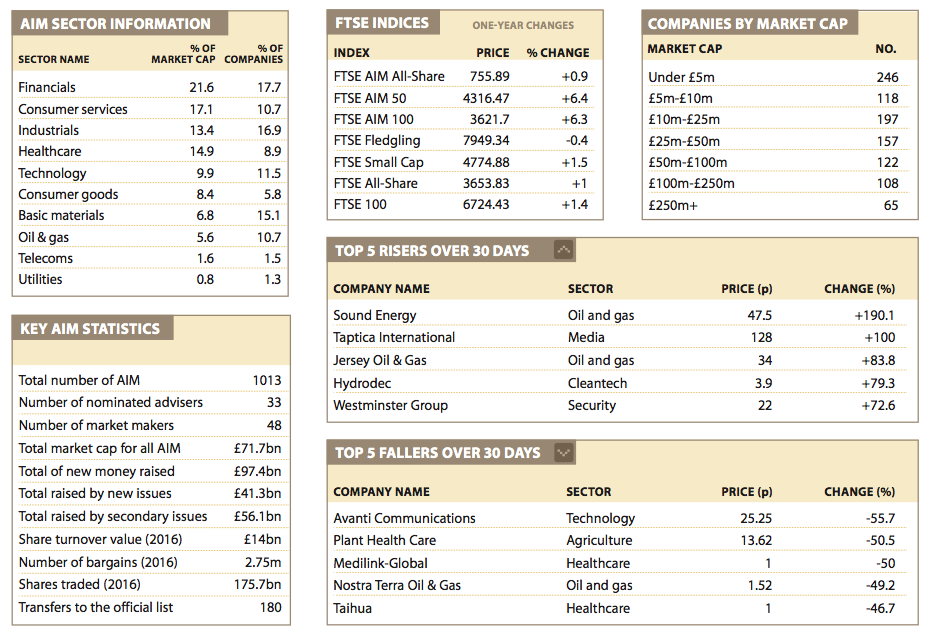