In the first volume in our series on the changing face of the British High Street, we look at retailers.

The changing face of retail in the UK

Brits have always loved to shop, and nothing typifies this love for spending more than the quintessential British High Street- the main retail strip found in every village, town, and city throughout the UK.

It's hard to believe that Christmas, the busiest shopping season of the year, is just 8 weeks away. And with the UK's most recognisable High Street, London's Oxford Street, set to turn on its famed Christmas lights in the coming days, we thought we'd take a deeper look at the changing face of the British High Street in our "Shifting High Street" series.

Whilst the High Street isn't set to die per se, it has changed and will continue to change, as it adapts to the shifts in consumer habits and spending and as we move away from shopping in brick and mortar retail sites.

This mini-series will cover a handful of sectors which have been markedly impacted by these changes in consumer habits and expectations. In this issue, we'll cover retail, and in the coming weeks, the banking sector, the real estate sector, and the casual dining sector.

For a headstart on our look at the casual dining sector read finnCap's Consumer quarterly sector note, called Shopping Trolley. It takes a deep dive into recent trends in the leisurely dining sector, and how these trends are impacting investors.

The Office for National Statistics says 17% (a surprisingly low figure in my view) of all retail purchases are now made online, an increase of 14% when compared to this time last year. Consumers in the UK alone currently spend around £1.2bn pounds every week online. 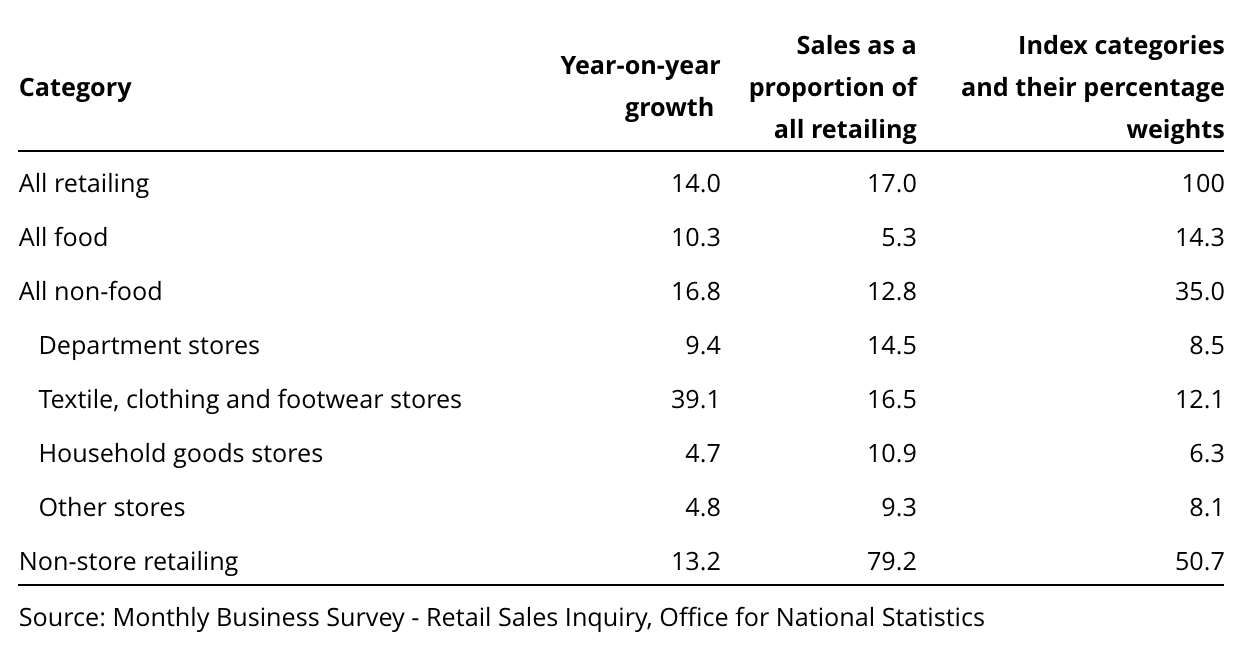 The above table from the ONS clearly shows that within the 14% growth in online retailing, non-food is a big driver and specifically "Textile, clothing and footwear" which grew a staggering 39% year-on-year.

Meanwhile, The British Retail Consortium (BRC) said there were as many as 40,000 fewer retail shops in the UK today as there was 10 years ago, with as many as one million retail jobs set to be slashed by 2025.

So what's driving these changes, and how are business adapting? 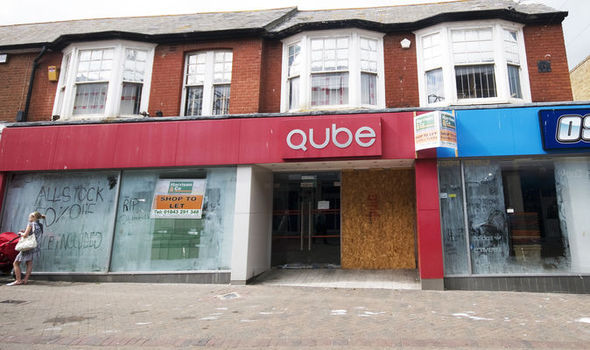 The impact of Amazon

Amazon has changed the retail game forever, growing from humble beginnings as an online book retailer in 1995 to become the world's largest online store. It launched Amazon Prime in the US in 2005 and followed suit here in the UK two years later.

The company started Amazon Prime in the US as a guaranteed two-day shipping service for a flat fee of US $79, later moving to the next-day delivery service we know today. This has changed what we as consumers expect from our shopping experience and subsequently forced many online businesses to follow suit. Those who fail to keep up with the ever-increasing expectations of consumers are sure to be left behind.

Amazon even began trialling drone-deliveries in the UK late last year, proving how serious they are about reinventing the idea of what's possible from an online retailer. If drone deliveries become the norm, this will up the ante even further. 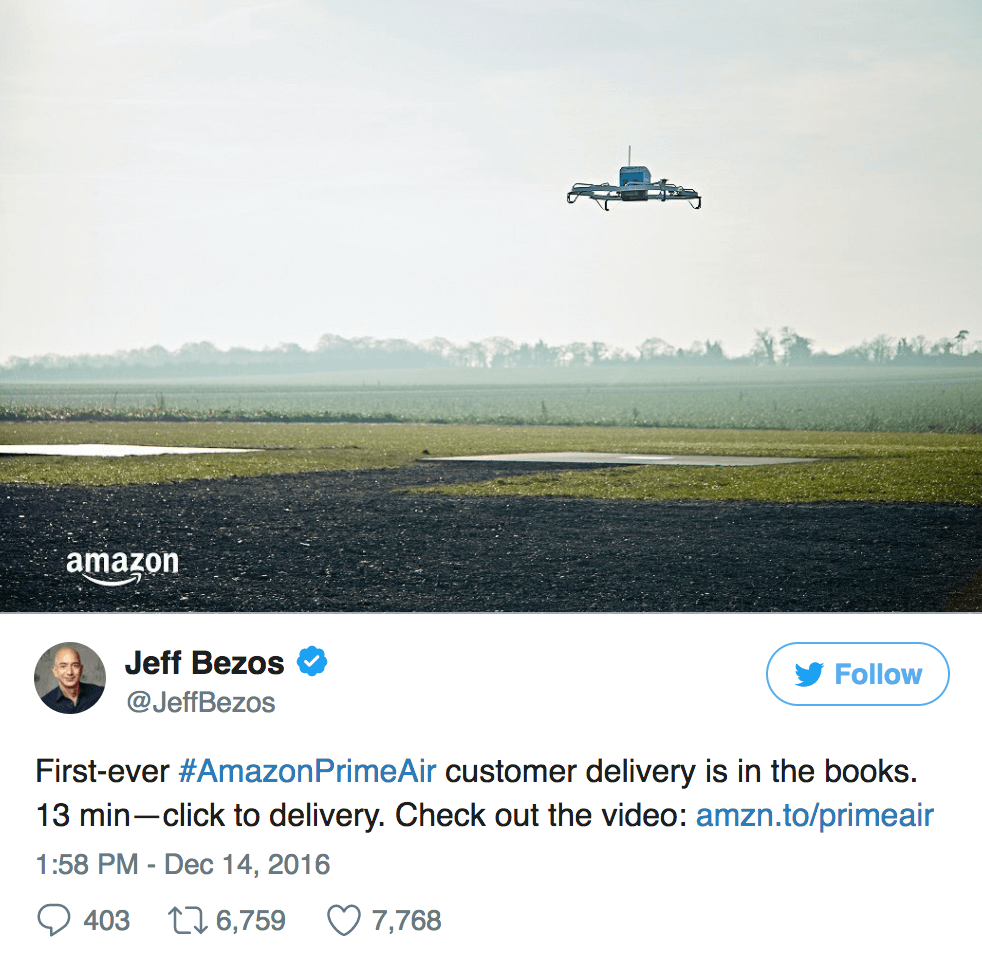 The rise of ASOS

Online fashion e-comms giant ASOS (LON: ASC) has become the darling of the AIM market since its IPO 16 years ago. It currently has the largest Market Cap of any company listed on London's junior market, valued at almost £4.6bn with reported Revenues of £2bn in FY17.

It too grew from humble beginnings, starting with a small offering of fashion brands to now sell everything from men's and women's fashion to activewear, face and body products and even golf and football wear. It also plans to launch into surf and snow products in FY18.

Like Amazon, ASOS has invested heavily in delivery. The Group even announced earlier this month it was doing same-day delivery for Londoners of selected boroughs, as long as the order is placed before 10 am. Shoppers willing to pay £12.95 per order can opt for ASOS Instant and receive their order by 10 pm the same day.

What is Fast Fashion?

Fast fashion retail giants like ASOS, Boohoo, PrettyLittleThing (who Boohoo now have a controlling stake in), Quiz and countless others have taken advantage of the youth of today's insatiable appetite for Fast Fashion - fashion styles that come and go quickly. The clothing isn't necessarily made to last, primarily because the 'next trend' is just around the corner.

Fueled by millennials consumption of social media, fast fashion means trends come and go with the wind and subsequently so do the clothes themselves. The major impact of this is inventory management. Having a broad network of bricks and mortar stores means the ability to quickly switch designs and roll out the new inventory across the branch network is constrained.

Online competitors are able to move rapidly to expand their offering of popular items and, crucially, to cut back on non-performing items without incurring the same level of costs involved in offloading inventory at cut-price across a large network of stores.

Never one to be left out, Amazon is also chiming in on the increased expectations of the fashion-conscious with the launch of Amazon Prime Wardrobe. This innovative way to shop brings the dressing room into the home by allowing consumers to order up to 15 items free of charge which are then delivered to Amazon Prime customers. Shoppers are then given 7 days to try the clothes before returning the items they don't want, also at no charge. The fewer items returned, the bigger the discount on the items kept - up to 20%. 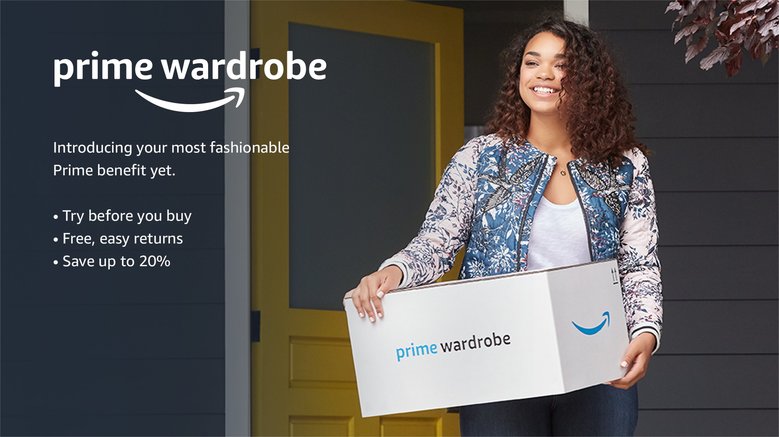 Brick and mortar retailers are continually having to differentiate their offering to keep up with the wave of innovative shopping experiences offered by e-commerce giants like Amazon and ASOS.

How has this impacted High Street retailers?

Several British retailers have gone into administration as a direct result of being unable to compete with online fashion retailers, including Banana Republic, BHS, Jaeger, and Austin Reed to name a few, while others like American Apparel have also become insolvent.

Some companies have ridden the wave of change better than others by diversifying into other areas in order to stay afloat. Smaller independent retailers, however, who are reliant on turning over stock to free up retail space simply cannot keep up with the pace of fast fashion.

Marks and Spencer flagged the closure of six of its stores back in April as a direct response to the changes in the spending habits of its customers. The Group is winding back its clothing operations and increasing its presence in food.

In its H1 16 results back in November 2016, M&S Chief Executive Steve Rowe said:

"Over the next five years we will transform our UK estate with c.60 fewer Clothing & Home stores, whilst continuing to increase the number of our Simply Food stores. In the future, we will have more inspiring stores in places where customers want to shop that complement our growing digital offer."

It plans to open 200 new food-only stores according to this BBC article.

Department store chain Debenhams has also stated its business model is to undergo somewhat of a transformation after ex-Amazon executive Sergio Bucher joined the Group as CEO in November 2016.

He planned a shakeup which includes an initial 10 store closures should they continue to underperform, the closure of several warehouses, and a transformation of its stores into "social shopping" sites that turn a visit to its stores a "fun leisure activity".

Bucher plans to devote more floor space to restaurants, nail and blow-dry bars, and hopes to turn "functional" trips into "experiences" by offering the option to drink, dine and spend time in a place that was once simply for shopping.

NEXT (a former market darling) is the latest Group to report its struggles on the High Street, with its November 1st trading statement reporting Q3 in-store sales dropping by 7.7%, countered by a 13% increase in online sales.

The below chart from NEXT shows the concerning trend over the last month or so, however, there are other factors such as weather at play here: 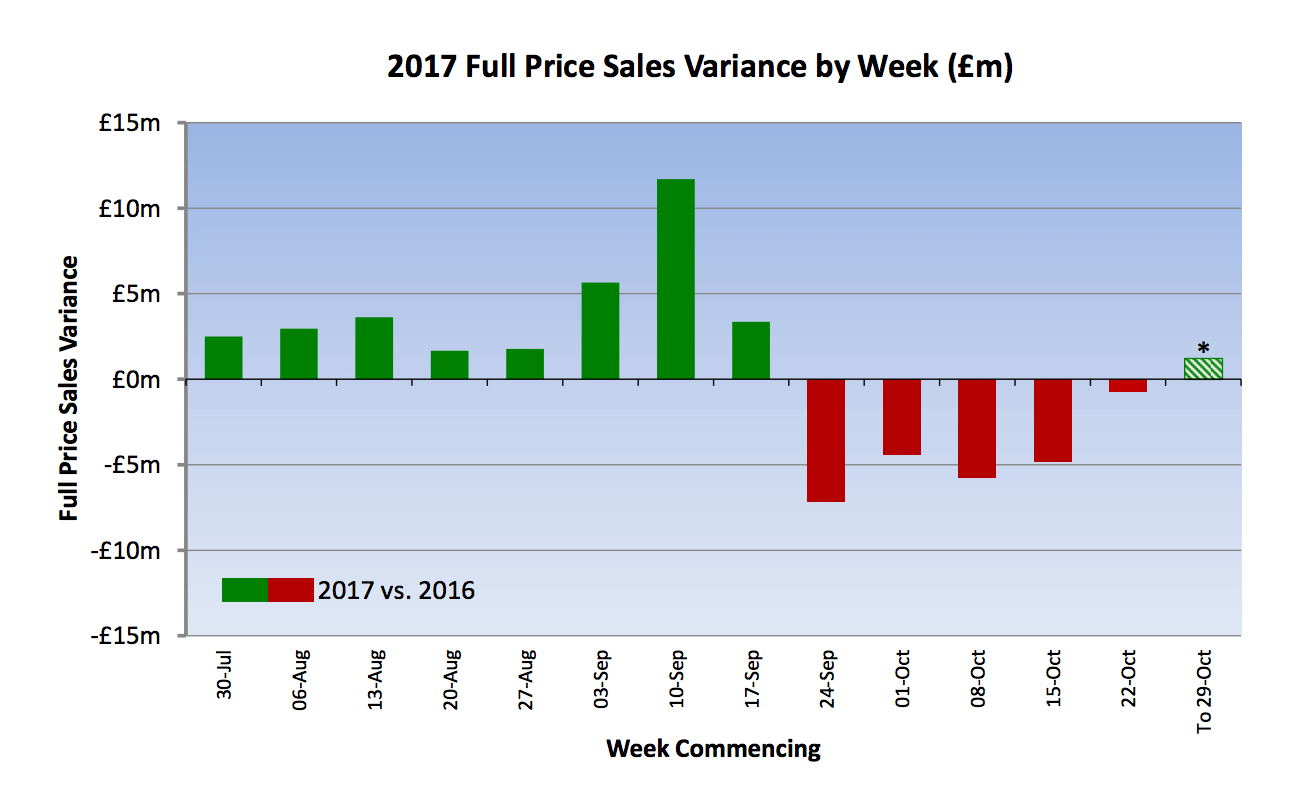 NEXT has been at the forefront of growing a strong online presence and is therefore relatively more insulated than others. It also boasts an incredible 20% operating margin and enviable free cash flow generation with a c.10% FCF yield. Nonetheless, shares in the Group fell 9% in early trading as it warned Q4 sales were forecast to fall by 0.4%.

A week earlier, Whitbread, the Group behind Costa, reported its Interims which saw Revenues and Underlying PBT both grow by 7% bolstered by its 2,300 Costa sites, many of which are on High Streets throughout the UK.

Commenting on Joules last month, Broker Panmure Gordon & Co. were upbeat in its morning note on the Group where it saw a healthy balance between online and high street sales:

"Growth on all fronts healthily balanced between retail, e-commerce, wholesale (UK and International, albeit the latter is very tightly focussed on USA and Germany) and licensing, such a strong broad-based multi-channel growth profile (anchored by a distinctive brand and unique product offer, but with low fashion risk) should allow for significant operational leverage of the well-invested operating cost base to meaningfully drive profits over the next three years."

What's next for the British High Street?

In an era where social media influencers have become the new mannequins, British High Street retailers will have to compete harder across an increasing range of business models in order to keep up with the online retail giants.

These changes are leading to the High Street becoming a place for leisure and "experiences", where stalwarts like clothing stores and banks and being replaced by coffee shops, gyms, restaurants and fast food outlets.

Keep an eye out for our next instalment of "the shifting High Street'" where we take a look at what was once the backbone of the High Street, banks, and how the long-stagnant industry is being shaken up by Challenger Banks.