Carribean hotel and restaurant group Elegant Hotels (LSE: EHG) has announced the opening of the Waves Hotel and Spa, just 6 months after acquiring and extensively redesigning the resort.

The company, which owns and operates six upscale freehold hotels and a beachfront restaurant on the island of Barbados, bought Waves for $18m in March and spent $4m on the refurbishment.

Stockbroker Zeus Capital says the asset is a natural fit with Elegant’s existing portfolio and confirmed that it was financed primarily through existing debt resources provided by the group’s bank. 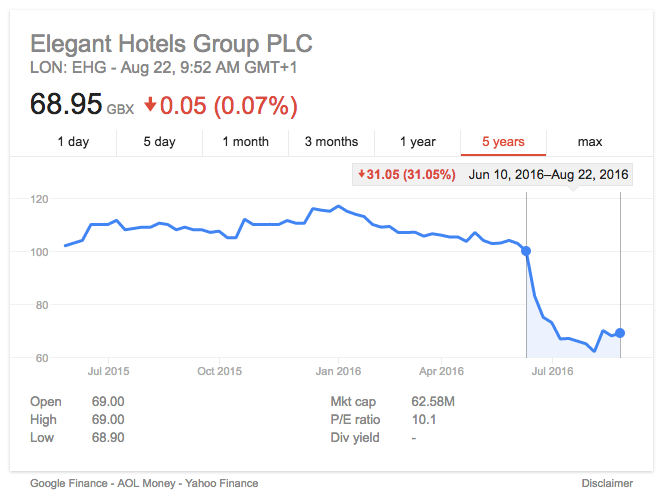 The acquisition is the company's first since it listed on the LSE in May 2015, and according the announcement, the Directors expect Waves to be earnings enhancing for the Group for the year ending 30 September 2017.

The company has lost 30% of its value since its half-year results in June that showed the company facing challenging trading conditions.

According to Zeus, the company's shares are currently trading on an FY16E EBITDA multiple of 7.3x, falling to 5.8x in FY17E:

"While earnings forecasts have been revised, we believe the opening of Waves is an important milestone for the company and represents good progress in delivering its strategy."

Zeus says the shares are asset-backed, trading at a 56% discount to FY16E NAV and have a sector leading dividend yield of 10.1%.

"While trading conditions are likely to remain difficult in the near term, we believe the asset backing and dividend yield more than compensates for this at present. The next scheduled newsflow from the company will be a pre closed trading update in mid/late October where we will look again at our trading assumptions in the core business."

EHG's dividend is covered 1.9x based on basic EPS, and 1.34x based fully diluted EPS.

"We are thrilled to have officially opened the doors of Waves to visitors, and are extremely pleased with the early feedback that we have received from customers and travel agents alike. I am very proud of what the team has achieved in realising the vision that we had for the property and we look forward to welcoming guests to what we believe is now one of the most attractive and desirable sites in Barbados."