British outsourcing and energy services company Mitie Group swung to a loss in H1 as the group announced it will withdraw from the domiciliary healthcare market and reported a whopping £117m write-off, pushing the FTSE 250 company into the red.

The company reported revenue down 2.6%, with operating profit falling 40% and earnings falling 44% versus the previous period. The significant decline in profits and the huge write-off has pushed the company into the red, as it recorded loss-before-tax of £100m, a £145m swing versus the previous period. As a result of the decline, Mitie has slashed its dividend by 26% (1.6x cover).

The company's update follows its September profit warning, that showed the business was suffering from changing market conditions, rising labour costs, and economic uncertainty. Downward pressure on homecare charge rates and a reduction in care volumes resulted in increased Healthcare losses for the group, leading to its withdrawal from that market. 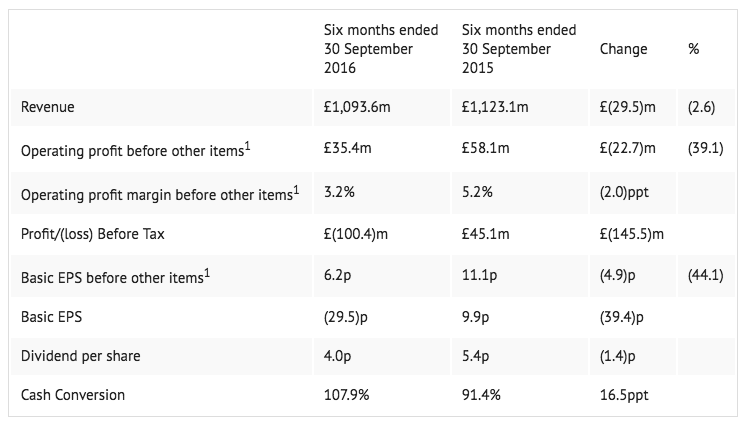 Despite the disappointing update, there were signs of progress at the company, with cash conversion up 16% and a healthy sales pipeline of £9.3bn.

The company says it expects performance to improve in the H2 as restructuring, increased project work, and enhanced revenue visibility from contract wins start to impact results. However, despite the progress expected in H2, underlying earnings in full-year results for 2017 are expected to be below managements' expectations.

CEO Ruby McGregor-Smith, said whilst H1 had been difficult, the firm was not alone in facing "significant macroeconomic challenges", and stressed that steps had been taken to counter the impacts.

"Second half performance is expected to improve with our new operating model as we adapt to market conditions."

'Under her strong and passionate leadership our FM business has been transformed with the ability to provide a broad range of services to our blue-chip client base... I am delighted that Phil Bentley has joined Mitie as our future CEO. Phil has demonstrated his leadership skills and strong customer focus at both Cable & Wireless and British Gas and he has an excellent track record of delivering shareholder value."