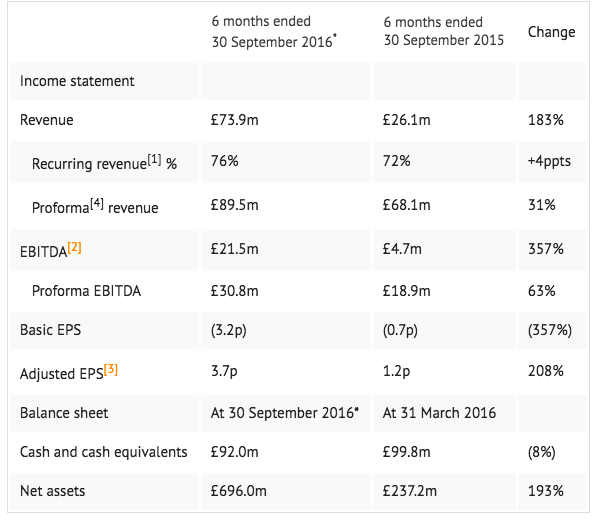 Vectura reported strong cash generation and period end cash of £92m after an outflow of £36.9m due to the Skyepharma merger.

Broker N+1 Singer said today's interims from were solid, with profitability ahead of expectations and strong pipeline development:

"The expected newsflow from Vectura over the coming months is significant: Utibron® vs. Anoro® Phase III data is due later this year, to be followed by the expected US launch of Utibron® and FDA approval of VR315/Generic Advair® by 10th May 2017. With two major near-term US launches ahead, we retain our Buy recommendation."

CEO James Ward-Lilley said the results represented a step-change following the merger with Skyepharma during the period. The group saw sustained momentum in recurring revenues from its latest products:

"Vectura now owns or is partnered with seven assets that are currently in Phase III development or under regulatory review and we have made substantial pipeline progress with our innovative and generic assets at both late and earlier stages.

We are making excellent progress with the merger integration process including completing the portfolio review, adding new programmes and implementing the new organisation structure. We remain on course to at least deliver the identified synergy savings and look forward to strong financial performance and continued progress across our pipeline in the remainder of the year and beyond."

finnCap's Slide Rule: How to identify the best companies in the UK small/mid-cap sector

Vectura - Not pausing for breath