CEO Stuart Mitchell is stepping down immediately, just weeks after the CFO retired

Building products distributor SIG plc released a particularly bad trading update this morning saying PBT guidance for the full-year would be £75-80m. The new guidance suggests the firm will be making significantly less profit in H2, about 30-40% less than the £47.7m achieved in H1 2016.

The company appears to be in a difficult period as it was also announced that company CEO Stuart Mitchell has stepped down with immediate effect, just a few weeks after the company's CFO retired. He had been at the helm for four years and his CFO for five years, so it is all change at the top.

Group revenues in the four months to October increased 10% year-on-year, having seen positive benefits from weakened sterling post-Brexit, but on a like-for-like basis, sales declined by 0.8% in the period. 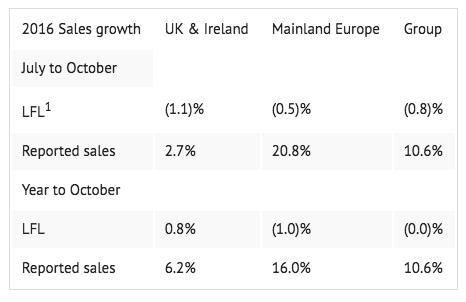 In the UK & Ireland revenues fell by 1.1%, as SIG's distribution and exteriors divisions saw sales fall 1.2% and 1.7%. The company says conditions have softened as trading slowed around the EU referendum, whilst competition in the market has intensified.

Notably, the group suffered delays in some of the projects in the commercial sector and saw weaker demand for technical insulation in key sectors.

SIG has taken action to reduce its procurement costs, but this hasn't offset the 30bps decrease in SIG's gross margin for the year to date.

Panmure Gordon covered the results in a note out this morning, saying that the "increasingly sporadic" construction market in the UK was providing difficult for all building merchants:

"Trading in the important months of September and October have been more challenging than expected and SIG has announced that gross margin pressures mean profit will now be in the region £75m-£80m (previous consensus ~£90m). The board is taking remedial action and has identified £10m of incremental cost savings, three quarters of which will benefit FY17 earnings."

Frustratingly, the profit warning could have been more transparent regarding expectations. Management confirmed the Group “now expects” PBT to be £75-80m but unhelpfully makes no mention of what they used to expect, or what the market expected.

Hot Off The Wires - The Day Ahead

Hot Off The Wires - The Day Ahead