Scottish engineering company The Weir Group Plc (LSE: WEIR) put out a minor profit warning this morning saying the firm expected revenues to be slightly below expectations as it experienced tough trading conditions during the quarter.

The third quarter brought difficulties for WEIR in several of its key markets, with minerals aftermarket orders down 7%, declines in its Middle East Oil & Gas operation, and challenges in the mid and downstream oil and gas market.

The company's disposal programme is on track to deliver up to £100m by year-end, and the company stressed it had continued strong cash generation in 2016.

Broker Panmure Gordon said despite Weir's share price doubling since February, the company's earnings are in long-term decline and investors will soon realise:

"...the dividend will have to be cut or suspended to protect the balance sheet, no matter how many bubbles China can create. Today, the management confirmed that EPS will decline more than expected in 2016 despite the benefit of FX but wanted to leave the impression that recovery is on its way especially in the North American oil & gas market."

"...as volumes and price declines are set to intensify in all markets. We don't know when the penny will drop but when it does you don't want to be holding this stock. We see no reason to change our target price of 750p which values the stock at a generous 13.3x."

CEO Jon Stanton said there were signs during Q3 that the company's core markets were improving, with the Minerals aftermarket returning to growth, North American O&G customers planning for higher activity:

"The Group's trading results reflected the low point in the North American oil and gas market and tougher conditions in the Middle East."

Mr. Stanton stressed that if commodity prices remained supportive, he anticipates sequential growth for the Oil & Gas division in Q4, but he confirmed that the firm still expected profits to be below expectations for the full-year:

"Assuming commodity prices remain supportive, we anticipate further sequential growth for the Oil & Gas division in the fourth quarter but little improvement in the pricing environment. Given conditions in the Middle East as well, we now expect the division to be around breakeven in the fourth quarter and slightly lossmaking for the full year. The combined outlook for Minerals and Flow Control is unchanged.

Therefore, including a small further foreign exchange benefit, the Group's full year 2016 profits are expected to be slightly lower than current market expectations."

The company's share price opened down 6% this morning before bouncing back slightly. 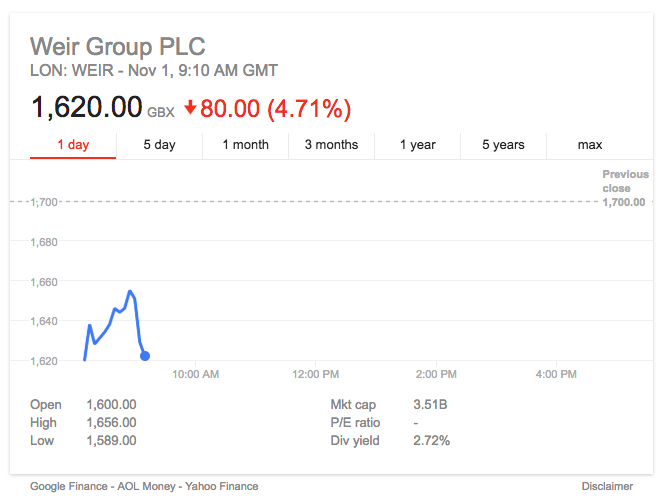 Agriculture leading the path, a long path, to recovery

Implications of Trumponomics for equities