Condor today reports that it has begun site preparation at the location of the La India processing plant in Nicaragua. This consists of the access routes (a road from a regional paved highway, in-plant roads and a bypass road for a nearby village) and all the areas set aside for the layout of the plant (stockpile reclaim area, comminution circuit and leach tanks, a laydown area and warehouse for the 2.8kt/d plant anticipated) to be cleared; over 11 hectares of Condor-owned land. This is expected to take 3 to 4 months to complete and clearly demonstrates Condor's commitment to the project and laying down a footprint in the area ready for construction.

Condor today reports it has resumed drilling at the site of the La India starter pits at its La India gold project in Nicaragua. The 4,000m diamond drill program aims to i) improve the drill space density in the starter pit reserves (445kt grading 4.2g/t gold) to enable final mine scheduling; ii) replace all the RC drill holes with diamond holes; iii) target areas of Inferred resource for upgrade to Indicated status; and iv) include such upgraded areas in mine scheduling.

Condor reported its Q3 results for the period ending September 2020 yesterday. The quarter again highlights the progress being made on fast-tracking, and de-risking, the La India project in Nicaragua towards production. Progress has been made on the design of the Tailings Storage Facility and the water management plan. Post-period a ground investigation drilling program began. There have also been preliminary designs of the proposed plant and several mine and waste schedules developed internally for the options on development.

Condor is seeking to develop the La India gold mine in Nicaragua. The deposit is a series of high-grade epithermal deposits developed along faults. The outlined resources, and defined open pit reserves, remain open along strike and depth and we are struck by the district-scale potential in the licence. Condor has a permitted reserve that can be mined by open pit and has defined an underground resource underneath three of the open pits; we expect further resources to be added to the inventory once drilling resumes. Condor is well managed with cash to finalise its economic studies. We see options for Condor in developing the project which we believe is scalable; high-grade starter pits delivering ore to a new plant or trucking to an existing plant in Nicaragua, followed by expansion and then underground mining. We expect the La India project to be a long-life, substantial mine, producing >100koz gold per year. We see an initial fair value in Condor at 130p based on a DCF analysis (NPV10) of Condor mining and processing its own ore which is fully supported by the market value of other companies operating in Nicaragua. 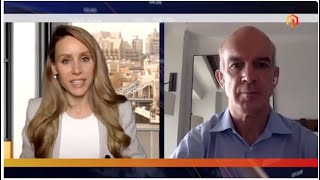 Jubilee put out an intraday press release yesterday updating on the performance in the first half (ending Dec 2020) of the FY 2021. Once again Jubilee delivers; significantly increased revenues and profits from its chrome and PGM division in South Africa and a small, but important, contribution from Zambia. Notably this improvement isn't just from commodity price performance; rather increased production, productivity, throughput, renegotiated contracts and all set alongside the strong performance of commodity prices –rhodium, palladium and platinum. We see this as still only the start for Jubilee as we look forward to the first copper oxide concentrates from the Roan project in Zambia to the Sable Refinery – where the Roan plant is currently under construction. Once again we are struck by the speed at which Jubilee moves to advance its projects and, with its South African cash engine showing no signs of slowing down. Jubilee can choose to move its wider ambitions in Zambia forward from internally generated cash flow. On the back of the strong performance we put our forecasts under review.

The revised threshold for the imposition of Supplemental Petroleum Tax (SPT) has now been implemented, with the threshold at which SPT is due increasing from US$50/bbl to US$75/bbl for the financial years 2021 and 2022. As a result, we expect Trinity to be exempt from SPT across all of its onshore licences below US$75/bbl. Using the forward WTI oil price curve as the basis for our model, we currently forecast Trinity paying no SPT during 2021 and 2022. We estimate that at the current forward price curve (2021: US$52/bbl) cUS$3.6m of SPT would have previously been payable by Trinity in 2021. As such, these SPT reforms represent a considerable boost to potential cash flow generation from Trinity's onshore licences should realisations average above US$50.01/bbl for any calendar quarter during 2021 and 2022. We update our model, increasing our price target to 32p (from 31p) a 160% premium to the current share price and reiterate our BUY recommendation.

We put forward a fair value estimate to 82.8p for Pantheon Resources from “under review for an upward revision” as from 25 November 2020 and from 75p as per our initiation note dated 11 November 2020.

Venit tempus, the time has come

European Metals has recently enjoyed a long overdue share price re-rating. The shares have increased ten-fold from Covid lows in April 2020 on the back of a marked improvement in lithium sector sentiment. EMH’s market cap is now £127m. Covid has in many ways accelerated the push towards EVs and the low carbon agenda. Europe is now the battleground for Electric Vehicles (“EVs”) where material sources, security of supply and the entire value chain is coming under ever increasing scrutiny. The DFS at EMH’s Cinovec project is due for completion by the end of 2021.The time has come for EMH and over the next 12 months we should see with more clarity how Cinovec fits into Europe’s growing EV and battery industry. We see no other project better placed to dovetail into the European battery market and supply battery-grade lithium at scale.

Union Jack Oil (UJO) has announced that the workover rig, associated services and equipment were mobilised to the Wressle oilfield development site during the week commencing 4 January 2021. The company, which holds a 40% economic interest in Wressle, expects that operations to enable the primary Ashover Grit reservoir to be flowed will be completed prior to the end of January 2021. With the field expected to commence production at a constrained rate of 500 bopd, UJO’s net production will be boosted by an additional 200 bopd providing valuable cash flow to the company in 2021.

Oil slid by the most in three weeks as a stronger dollar and weak US economic data stoked concerns over an economic rebound. Futures in New York tumbled 2.3% on Friday after a rally in oil earlier in the week pushed the benchmark into overbought territory. The US dollar strengthened, reducing the appeal of commodities priced in the currency. US consumer sentiment cooled more than forecast in January and other economic data such as sluggish retail sales and producer prices also portray the obstacles still facing the country as it emerges from the pandemic. Meanwhile, President-elect Joe Biden said he will ask Congress for $1.9 trillion to fund immediate relief for the US economy that has been pummelled by the pandemic. But the large price tag and inclusion of initiatives opposed by many Republicans set up the aid package for a drawn out legislative battle. Despite the pullback in oil futures, vaccine breakthroughs and Saudi Arabia's pledge earlier this month to deepen output cuts are expected to support prices. JPMorgan Chase & Co said a “nasty deficit” could emerge in the oil market later this year. Meanwhile, technical indicators had been flashing warnings signs all week. The 14-day Relative Strength Index for both US and global benchmark crude futures traded above 70 this week in a sign they were overbought, though both slipped under that level Friday. Prices  West Texas Intermediate for February delivery fell $1.21 to settle at $52.36 a barrel. Futures rose less than 1% this week.  Brent for March settlement lost $1.32 to end the session at $55.10 a barrel. The contract fell 1.6% during the week. The market's structure has also softened. Brent's prompt timespread dipped back into contango on Friday, a bearish structure where nearby prices are cheaper than later-dated ones. This week has seen the annual commodity index rebalancing take place -- a move that was expected to see as much as $9 billion flow into the oil market. Since it began last Friday, there has been a surge in so called trading-at-settlement volumes, an instrument often used by participants with index exposure. For Brent, average volumes over the last five days have reached a record. Other oil-market news:

Further media reports that Dr Martens, the British Boot brand is planning an IPO on the LSE. It is currently owned by PE group, Permira who is expected to sell down its stake at the IPO. March 2020 YE the group had revenues of £672m and EBITDA of £184m. Deal size TBC. Upon Admission to AIM, Nightcap will acquire The London Cocktail Club Limited (the "London Cocktail Club"), which is an award winning independent operator of ten individually themed cocktail bars in nine London locations and one location in Bristol. Offer TBC Due mid Jan. HSS Hire Group, HSS.L transfer from Main to Aim. Mkt Cap c. £70m. Recently raised £52.6m. Leading supplier of tool and equipment for hire in the United Kingdom and Ireland and has provided equipment hire services in the United Kingdom for more than 60 years, primarily focusing on the B2B market. Due 14 Jan. VH Global Sustainable Energy Opportunities plc, a closed-ended investment Company focused on making sustainable energy infrastructure investments, today announces intends to launch an initial public offering of shares on the Official List (Premium) of the Main Market of the London Stock Exchange. Due by Early Feb.

Results from the 2020 soil-till sampling campaign have been reported today and are positive with widespread anomalous gold values, including the highest soil-till assay results to date, along strike to the east and west of BAM Gold for a total length of 8 kilometres. Numerous new drill targets have been identified which have the potential of being advanced into additional resources to continue the rapid growth of the BAM Gold Project. Drilling has commenced in the area to the west and has intersected similar geological lithology and mineralisation to BAM Gold. The drilling programme for 2020-21 at the BAM Gold Deposit is progressing as planned with a total of 6,518 metres of HQ diamond core, comprising 30 drill holes, completed to date. All drill holes have successfully intersected prospective mineralised zones associated with the BAM Gold Deposit. The drill core has been logged, processed, and sent to ALS Minerals of Thunder Bay for analysis to date. Assay results are pending, with increased exploration activity in Canada, the labs are full, with assays now taking 7-8 weeks. The current funded drilling programme is expected to complete in April 2021.