Welcome to my weekly blog. I have a bit of a moan further down about the Constellation Healthcare deal, but before that, I mainly want to write about what you might call the "Pension Deficit Dogs" today. These are companies with large, poorly funded pension deficits that are particularly sensitive to the discount rates used to calculate future liabilities. I think they're starting to look interesting.

The quick way I look at the landscape to get a snapshot of pension health for each UK listed company is to use a ranking system:

The main chart above plots all relevant UK-listed companies, of which there is about 200, ordered by my "pension sensitivity" rank (stable/low rank on the left, highly sensitive/high rank on the right). I then plot the gross pension liability as a percentage of market cap on the y-axis.

The lowest ranked stock on this basis is Hogg Robinson, and I've highlighted a few others which also look particularly sensitive with respect to their large pension obligations. These include Clarke, Communisis, Coats, Renold, Norcros, Haynes Publishing Group, Heath & Sons, and Trinity Mirror.

So what? It's already baked into the price...

What's interesting is not that these companies have big pension obligations, that aren't well funded. This is already known and priced in. What is interesting, however, is how much these obligations could shrink next time the pension trustees mark their discount rates to the current yield curve.

Below is a scatter chart showing the discount rate used in each UK-listed companies' pension plan (sourced from Bloomberg). 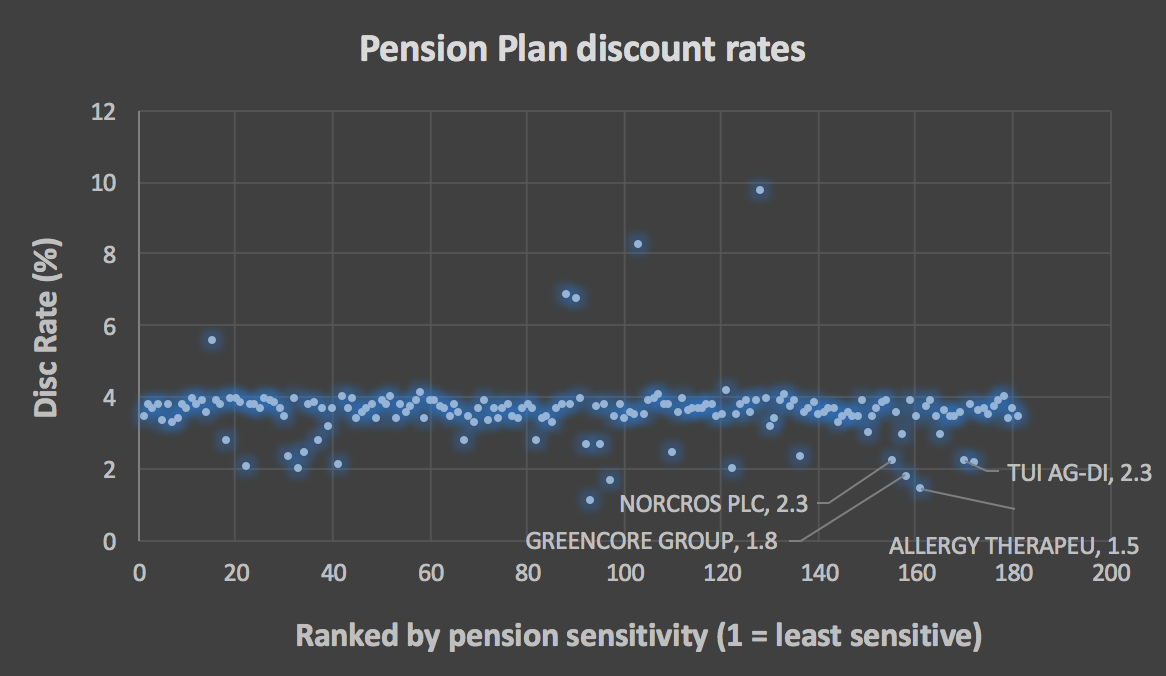 The trend is blindingly obvious... most companies are using 3.5%-4% as a discount rate for their future expected pension cash outflows. However, there are some outliers on the downside like Norcros, Greencore, Allergy Therapeutics and Tui. Their pension plans are using 1.5%-2.3%.

In fact, Norcros only just cut its discount rate. It reported Interims to September last month (mid-November).  Management marked the discount rate to market with a big cut from 3.55% to 2.25% as UK yields had dropped materially post the EU referendum. The impact this had on its pension deficit was to nearly double it from £56m to £98m. The deficit has now grown from £22m in 2014, and £44m in 2015 when the last triennial valuation took place.

The yields had indeed bottomed out but have since rebounded as shown below and as I mentioned last week.

Will the next round of results see rising discount rates?

We may well see a series of discount rate increases if bond yields continue their march, and this could well be the case if President Trump continues to signal he will carry out his $1tn infrastructure plan.

Looking at these companies over the last year, they have all underperformed the FTSE 100 (orange line).

Clearly, there are other idiosyncratic factors at play but over the same period yields also consistently trended down to their trough in September.

Last week one of my big holdings Constellation (LON: CHT) was bid for by the CEO/founder Paul Parmar, backed by US private equity. CHT was a key, high-conviction holding for me.

Breaking down the bid, there was 235p in cash and 35p of a Promissory Note. We should ignore the cheeky "Promissory Note" which matures in 7 years, and hence the offer price is effectively 235p. Given this company is 100% US$ earnings, when you convert the offer back into $ it's a pretty small premium.

I'm unhappy with the bid, as I had high conviction the share was heading towards 300p. It had a decent pipeline of acquisitions and was now debt-free. On the flip side, I have made a decent return so I can't complain too much.

Mr. Parmar, the CEO, owned 52% already, so it looks like the deal will get done. Also, it is unlikely there will be another bidder. There is a big break fee in place to dissuade new entrants, and as I said, the CEO own 52%!

It's crucial for Management to have skin in the game, but this is an example where the rest of the shareholders are relatively powerless to do anything when the CEO has a majority, even if the price is too low.

Paul Parmar is not a popular individual, and if you read his blog you will understand why. In my opinion, some of the more colourful stories of his past led to UK fund managers never giving CHT the rating he wanted, to raise more equity for his acquisition strategy. So he's teamed up with US private equity to execute the same strategy away from public markets. I wouldn't be surprised if we see a NASDAQ IPO in a couple of years at a much higher multiple.

Many fund managers, including myself, will find it difficult to own the Promissory Note because many have restrictions that funds can only hold listed equity. This, in my view, is what's causing the big discount to the 270p total bid price. For private investors who might not mind holding a 5% coupon note, this creates an arbitrage opportunity whereby today shares can be bought for 213p that are ultimately worth 270p. As I say, it's not for me, but worth highlighting.