CFD platforms still worth a look

Back to school, and yet another strong week for equity markets. Thanks to Rob for filling in for me with his excellent piece on Purplebricks.

I thought I would revisit the CFD platforms this week. I wrote about them in one of my earlier blogs last year, and a lot has happened since then. They’ve all performed very nicely, and PLUS has been on a tear, although it was starting from such a low base this should not have been a surprise. As mentioned before, I am a holder of these companies.

Massive PLUS dividend last week - Be careful of the tax!

Before reviewing the lie of the land for the CFD platforms, I want to point out the giant Plus 500 dividend that went "ex" last week. The critical detail I want to highlight to all readers who hold shares, as we do, is that you will be charged 25% tax on your dividend unless you apply to the Israel Tax Authority (ITA) and obtain a certificate for a reduced withholding tax rate of 15%. The shares went ex-dividend on the 2nd March.

Here’s the form from the ITA: https://taxes.gov.il/English/TaxesFormsList/itca114.pdf

For more detail on the Israeli withholding tax process, there is a useful article here from 2014:

PLUS has outperformed CMC and IGG since drop

All three CFD providers have been good performers since the original slide in share prices following the announcements from the FCA and other regulators in early December. However, PLUS has been the standout performer of the three with a 29% rise in share price, versus 9%/10% for the other two. 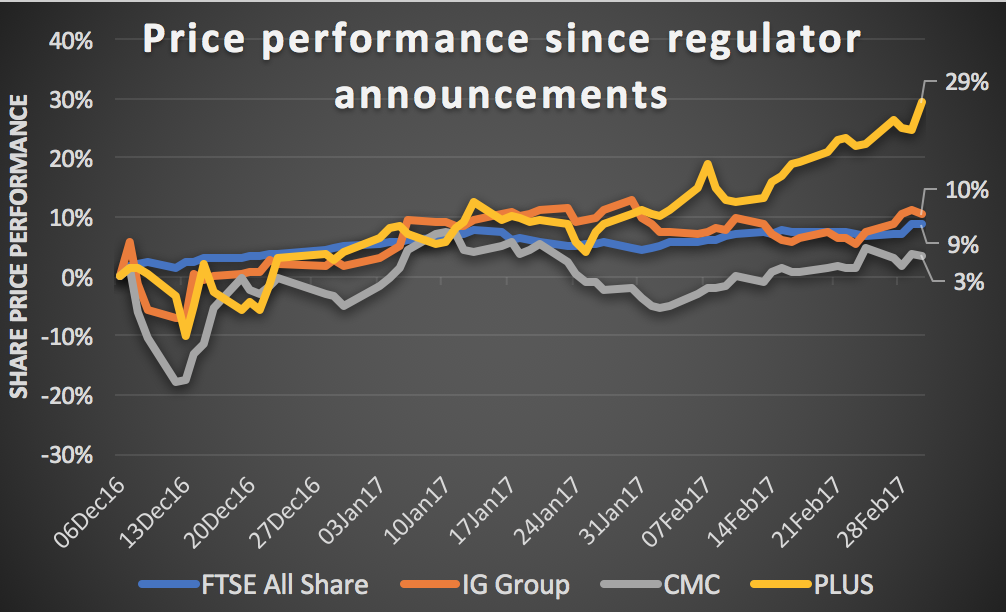 I would just point out that I’ve incorporated the 53p dividend from PLUS that went ex last week (after stripping 15% withholding tax from the gross amount). Even net of tax, that still equated to a lovely c.10% dividend yield. I would not expect this level of special dividends (22p of the 53p) to continue now there is significant regulatory uncertainty.

How did the Brokers react

Consensus forecasts for all three CFD platforms took a hammering after the regulatory announcements with a moderate hit to 2017 earnings and a bigger hit in 2018, which will be the first full year to be affected by any changes that may be coming.

Below is a chart showing consensus EPS forecasts for 2018 and how they changed post the FCA announcement. 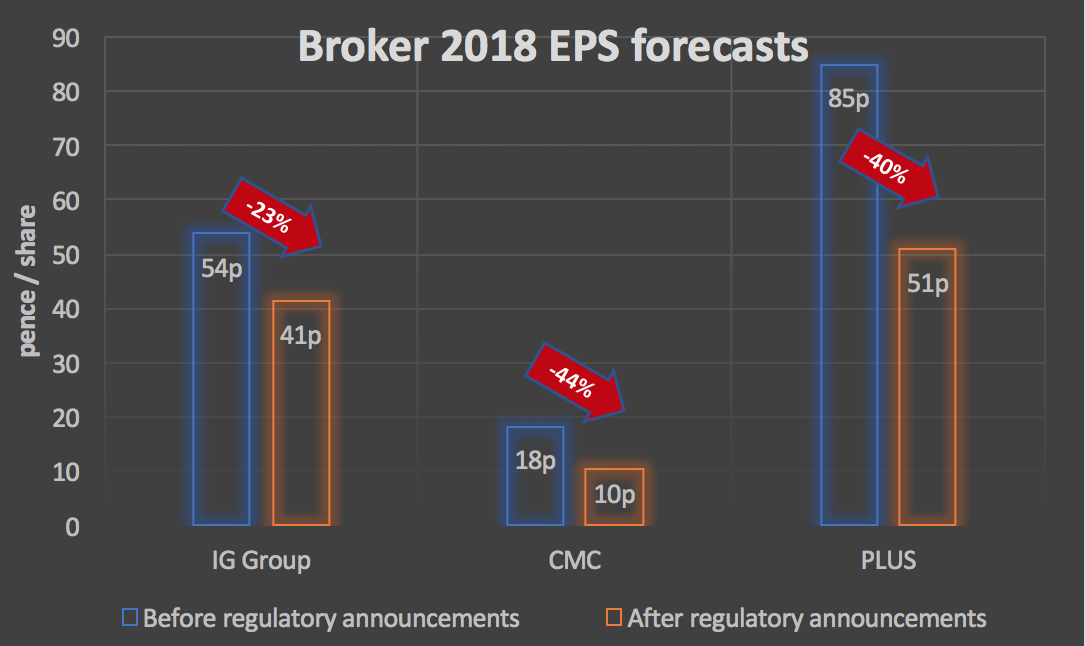 As you can see, analysts were far more aggressive in their cuts to forecasts for CMC and PLUS, whose numbers came down 44% and 40% respectively, than they were for IG, whose 2018 consensus EPS estimates reduced 23%.

Part of this could be a perception that IG is the market leader, certainly in the UK, and it operates further up the quality chain than PLUS. This is probably fair.

However, another factor which I think we could be seeing here is the difference in coverage depth. PLUS and CMC both have fewer analysts covering them than c.£2bn market cap IG Group. Therefore consensus will have more of a weighting from the corporate brokers. These analysts may well err more on the side of conservatism in the face of an uncertain conclusion to the consultation period. Analysts much prefer to increase forecasts into good news and a recovery.

Finally what multiples has the market been discounting

I looked at the 2018 price-to-earnings multiple the market has been applying to each of the CFD platforms and how that has evolved over time, starting about a week before the regulatory bombshells hit. 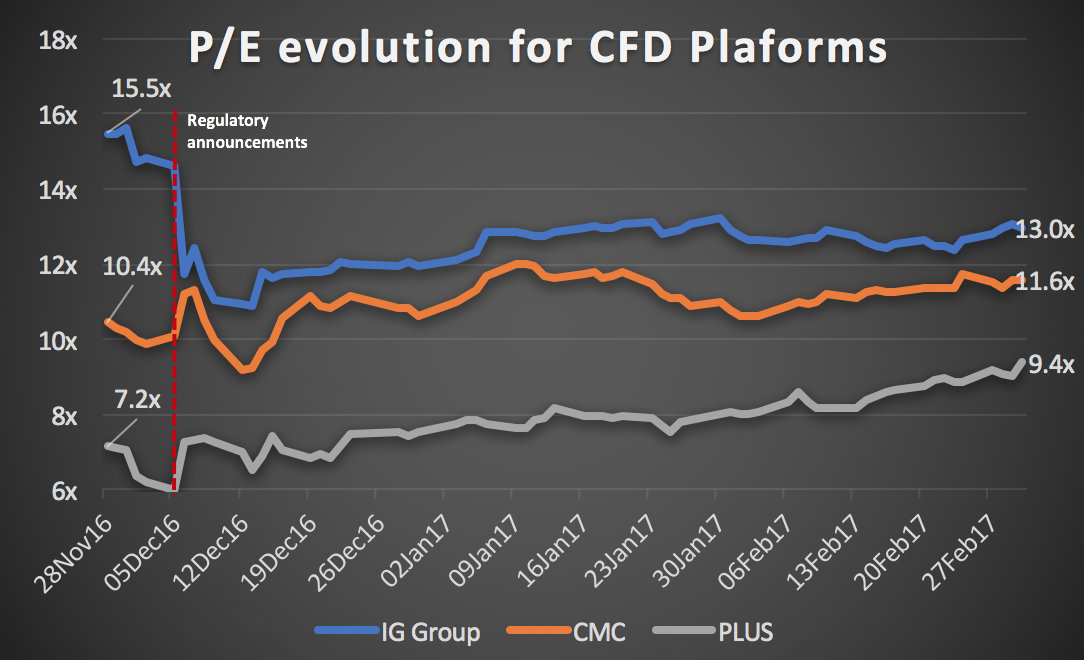 Interesting conclusions to be drawn from the above chart:

Overall there has been a converging of multiples. However, there is still a sizeable c.40% gap between the valuation placed on IG shares and that placed on PLUS shares. Furthermore, the multiples are based on Plus 500’s consensus earnings forecasts that were slashed 40%, compared to IG’s falling 23%.

Cash on the Balance Sheet should be accounted for

My analysis of P/E multiples above doesn’t account for the amount of cash on the Balance Sheets, which is a further reason why I like these companies.

IG Group and PLUS are both generating lots of cash but are also sitting on large cash balances, CMC slightly less so. It is important to strip out client cash which all three do clearly in their Financial Statements. After removing client funds from the equation, IG is sitting on a cash pile of c.£220m (July 2016 Results), CMC has £42m, and PLUS had an enormous $136m﻿ at year end. When compared to the market caps of £2bn for IG, £350m for CMC and £490m for PLUS, that’s a lot of excess cash.

Analysis of the earnings multiple discounted by the market should strip out this excess cash first, which would put the three on even lower multiples.

Consultation period to close tomorrow - what next?

The FCA’s consultation period runs until the 7th March, i.e., tomorrow. All comments must be submitted before the deadline, and then the Policy Statement is scheduled to be released in “Spring 2017”. This gives the FCA until mid-June 2017 to digest the various views of key players and come to a decision.

The only real catalyst that matters over the coming months is the decisions of the various regulators, particularly the FCA and BaFin. Any move by the FCA towards the other regulators’ position of a preference for limited risk accounts rather than onerous leverage caps would be a significant positive for all CFD platforms.

LIBERUM: Plus500* - Extension of positive tax status leads to 14% increase in earnings

CFDs - Tough week but worth a closer look