The discounted valuation is justified for now but there is a clear path to value creation.

Hope you’re all feverishly selling your nasty diesel cars ahead of the “toxin tax”. I’m holding fast for now in the hope that, like most top-down diktats, we’ll get another flip flop down the line as some scientist discovers diesel fumes are actually good for us.

I’ve written on Jackpotjoy in the past, but I thought I would lay out the investment case and the risks as I see them, given their FY Results last week. Full disclosure I am a holder of the shares.

In summary, the risk profile of JPJ is different to most stocks in that the bull case boils down to de-leveraging of its oversized debt pile and margin expansion. As I said before, it is much more the risk profile you would expect from a leveraged buyout vehicle, and therefore more akin to a private equity investment than a listed share.

Adjusted EBITDA in 2016 was roughly £100m and is expected to grow over the next few years. The two uses for that cash are to pay down the debt-plus-earnouts of just over £400m and to pay interest on said debt, which currently runs at around £33m pa.

Granted, EBITDA has its weaknesses as a proxy for cash generation, especially given the painful interest bill JPJ pays, but less so for the depreciation & amortisation as this isn’t a business that incurs high levels of annual capex.

Operating cash flow is perhaps a better number to focus on. In 2016, JPJ generated £83m in cash and, according to Edison, it should make £100m this year. The reason for the lower cash level versus EBITDA in 2016 is down to one-off costs like listing fees and paying off the previous Management, which (hopefully) won’t be repeated anytime soon. Management tell us the broader online bingo market is growing at 10% per year, so we should be expecting some annual topline growth.

How will JPJ use its generated cash?

Over the next three years to the end of 2019, the Group should generate over £320m of cash, working on the assumption the market continues to grow as it has in previous years, and that Jackpotjoy retains its low-churning customer base.

The interest bill over that period runs to around £100m. Sundry expenses such as tax and capex might account for the next £20m. That leaves £200m to pay down its liabilities. On that basis, the debt pile would be just over £200m, and the net debt to EBITDA would be under 2x, a much healthier level.

What if there is no growth?

I suspect the reality will be a slower pay-down of the debt as Management has highlighted that dividends can be paid once net debt falls below 2.75x EBITDA. Personally, I would prefer distributions to start later and from a low base so as not to delay reaching a more prudent level of gearing.

I also suspect we may see some share-based compensation around this time. As long as it is reasonable in size and not premature, I don’t have a problem with this.

Below is a rather useful table Management included in the recent Results that I’ve marked up to highlight the uses of generated cash over the next few years.

It looks reasonable to assume that the Group achieves a leverage ratio of 2-2.5x EBITDA by the end of 2019, a much healthier level that would relieve lenders and the market.

Typical banking covenants are often set at around 3x EBITDA so getting down to 2x would be a reasonable level and an efficient Balance Sheet. I would prefer 1-1.5x given the type of business JPJ is in, and therefore the potential for leftfield hits to its earning potential, eg regulatory changes and tax changes.

Restoring a healthier financial position will lift the chief concern that is weighing on the shares and (justifiably) leading to a discounted valuation in the market.

Edison put out a very helpful note last week with the below table showing the multiples gaming peers trade on: 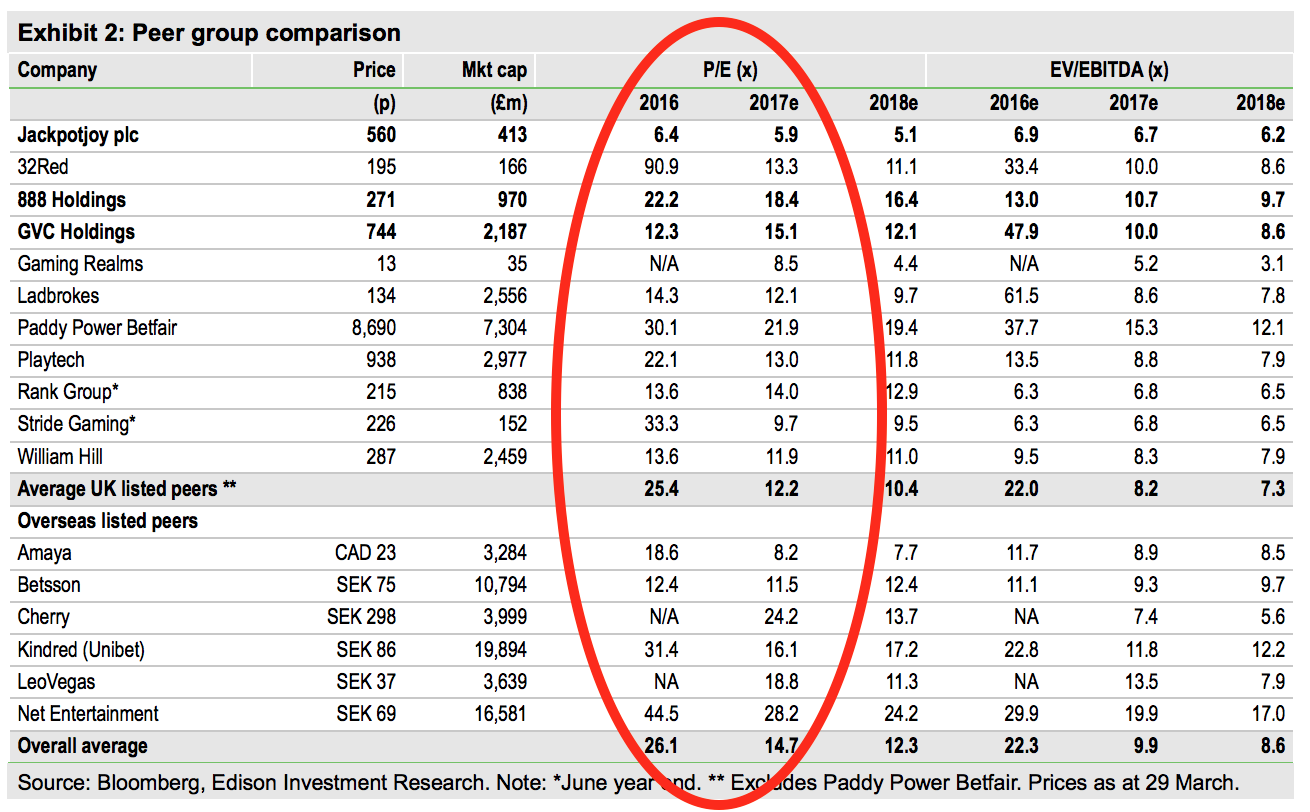 Equally, if you look at forecasts for 2017 earnings, the peer group trade on around 10x-20x earnings, whereas Jackpotjoy trades at less than 6x, according to Edison estimates.

Is a large discount justified today? Absolutely. This is not a share without risks, and we should be compensated as such.

Will that multiple change should the deleveraging proceed as planned? Again, absolutely.

On PE multiples the valuation range is wide

If the shares re-rate in a few years to 10-15x earnings, that will result in a market cap of £650m-£1bn based on 2016 earnings of £65m. Assuming the growth in earnings forecast by Edison puts the market cap at £800m-£1.2bn. The valuation range under this PE multiple is, therefore, wide but the lower end still represents a 50% uplift from current levels.

Looking again at the Edison table above, the wider list of gaming platforms trade on multiples of 8-10x EV/EBITDA. If I use current EBITDA levels of £100m then a normalised enterprise valuation would trade in the range of £800m-£1bn. If we assume the paydown is slower than expected and net debt by end 2019 is £250m, that should result in a future market cap of £550m-£750m. This represents between 30% and 77% upside from current levels.

Overall… this is an “eyes wide open” stock

As I say at the top, I am a holder of this company. It carries a different profile to most listed companies and it comes with risk. If the market deteriorates and cash generation slows then the paydown schedule could push to the right and the share will continue to languish on current low multiples. If its relationship with Gamesys sours, then this could impact operations significantly.

The market is rightly pricing in the additional risks and the extended Balance Sheet, hence the low multiples versus peers.

On the other hand, there is a clear route to value generation for shareholders here assuming Management can deliver by keeping cash generation up, paying down debt, and hence increasing the equity share of enterprise value, and the multiple Mr Market is willing to give to the company.

Gamesys Group - Ahead of recent guidance