Blogs >
The Naked Fund Manager >
What to make of Challenger Banks

What to make of Challenger Banks

The Banking sector isn’t something I focus on, and it is certainly under-represented in my fund. However, in keeping with disruption and technology themes that I do focus on, I think the rise of the Challenger Banks are fascinating and could bring about real change in the sector.

The big banks are faced with structurally high costs related to nationwide branch networks, creaking IT infrastructure and legacy issues such as PPI. Since the financial crisis, their reputations have been damaged, and we have seen a significant increase in regulatory oversight. The sector has now become so regulated and burdened with compliance costs that the main players have been reduced to utility level margins.

If these layers of compliance helped address the systemic issues prevalent before 2008, then they are worthwhile. Unfortunately, in my opinion, much of the cost burden adds nothing to systemic safety, but instead needlessly erodes margins without addressing the problem.

The art of good regulation is to create the framework in which markets operate with as small a number of elegantly written regulations as possible, and then let market forces do the rest. In other words, regulations should set the incentives for the market and not get involved in the process.

However, some recent regulatory changes have been very helpful. The FCA’s drive to make switching of current accounts easier is a great example of good regulation. It will result in more competitors and less systemic risk. The big 4 (HSBC, Barclays, Lloyds and RBS) have a UK market share now that is above where it was heading into Global Financial Crisis, so there is motivation for the challengers to succeed, especially from the government and regulator.

The retail banking sector is dominated by a handful of big players (HSBC, Barclays, Lloyds and RBS) but competition is coming from a number of new(ish) companies. Most are delivering strong growth as they compete with slower moving and far more capital-intensive business models. Some are already profitable and achieving healthy returns on equity.

The first group of “challengers” are unsurprisingly known as Challenger Banks. After the calamity of the Global Financial Crisis, these banks are offering similar retail banking services as the established players, but are focussing on customer service and brand loyalty as a unique selling point. Metro Bank, Virgin Money and CYBG are examples of challenger banks. Virgin Money is the rebranded Northern Rock loan book and its network of branches which is now being managed under the umbrella of Virgin, one of the best in the business when it comes to customer services. Metro Bank was launched in 2010 and is the only significant challenger bank to be competing with the establishment head-on, with a growing network of bricks and mortar branches. CYBG has been around a long time but spun out of NAB and listed last year.

Other competitors focus on niche areas such as financing for small businesses or the Buy-To-Let market. OneSavings is an example of a business that is almost entirely lending in the UK mortgage market with 2/3rds of loans for Buy-To-Let mortgages. Shawbrook, on the other hand, is active in a few areas of lending including both property finance (e.g., BTL, Commercial) and business finance (e.g., working capital lending, asset finance and structured finance). Aldermore is another example of a mixed business model with c.75% of mortgage loans spread across residential, Buy-To-Let, and commercial mortgages, as well as other SME lending.

Finally, there are the online disruptors like Monzo and Starling, neither of which are listed, who are looking to capture market share in the huge Personal Current Account market which has been historically very sticky for the established banks. These new fintech startups are driving a long overdue improvement in the level of service expected from a bank account. Features such as analysis of spending habits, instant notification and itemization of expenditure, highly competitive foreign exchange rates, and instant card freezing and unfreezing are forcing established banks to up their game. These companies are getting a lot of traction with Millennials and the younger generations.

At this point, I should really namecheck a Panmure Gordon analyst, Shailesh Raikundlia, who published a terrific and comprehensive sector report on Challenger Banks last month. It really is worth a read, and I will be unashamedly borrowing some figures from it.

Challengers are just scratching the surface

The UK loans market is enormous, with around c.£2trn of outstanding loans, and Challenger Banks make up only c.£80bn of that amount, which is roughly 4%.

Breaking the total market of nearly £2trn down you can see over half of the loans are for Owner Occupied mortgages. 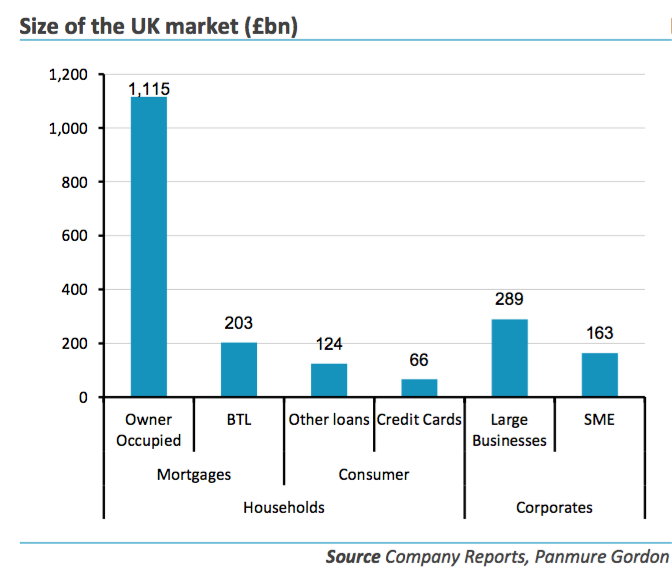 And drilling into the Challenger Banks’ 4% market share, Mr Raikundlia shows the majority sits with Virgin Money and CYBG. 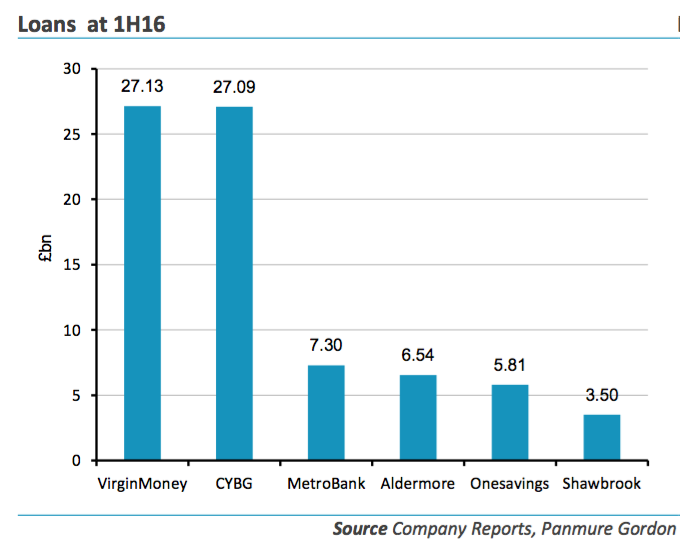 I looked at the two or three year historical reported revenues and the consensus expectations for the next two years to get a feel for the average annual revenue expected over that time horizon. The chart below shows there is a stark difference between the top line growth expectations for the challengers and that of the established banks. 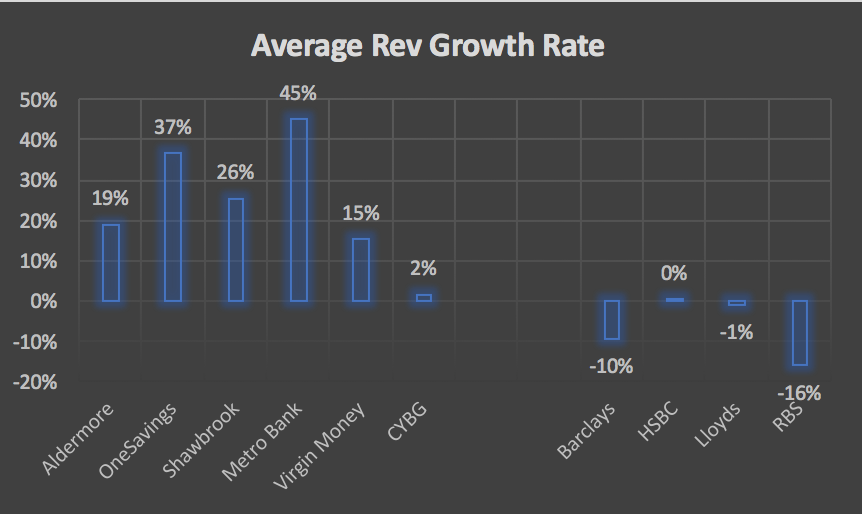 The only challenger that looks underwhelming concerning revenue growth is CYBG, which is more akin to the big banks. Metro Bank is leading the pack at 45% per annum, closely followed by OneSavings.

The Cost: Income ratio is a useful metric to get a feel for the cost structure of a company. It is defined as the admin expenses as a percentage of total operating income. Clearly, the lower the number, the better and as the chart below demonstrates, OneSavings Bank is best in class amongst the challenger banks. 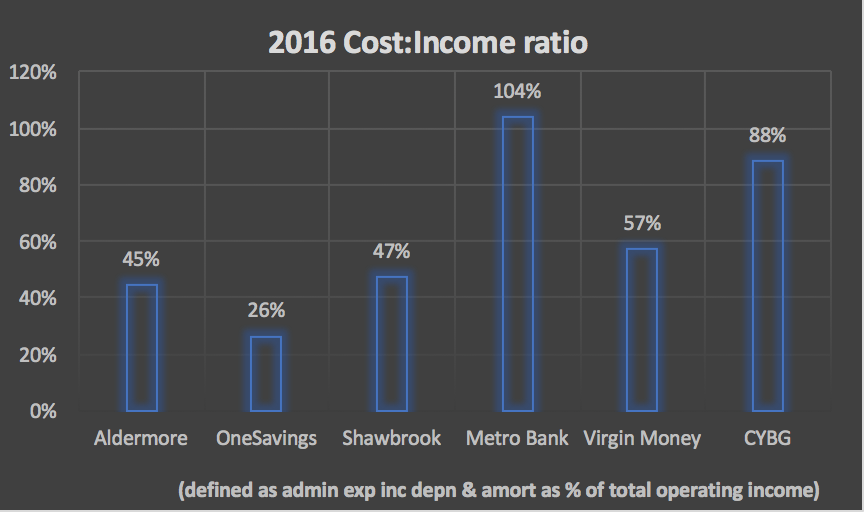 A Cost: Income Ratio of 26% is mightily impressive and is a result of the focused business model of UK mortgages and the large Indian back office where staff costs are a fraction of UK costs per head.

The other end of the spectrum is Metro Bank which operates a higher cost branch network model. However, once it reaches scale these costs should come down to more normalised levels.

The lack of legacy cost issues, the focus on higher margin business, and the absence of a large cost base has resulted in the challenger banks exhibiting healthy returns on their tangible net asset values. The below chart shows the Return on Tangible NAV using 2016 reported and forecast numbers and taken from the excellent Panmure note. 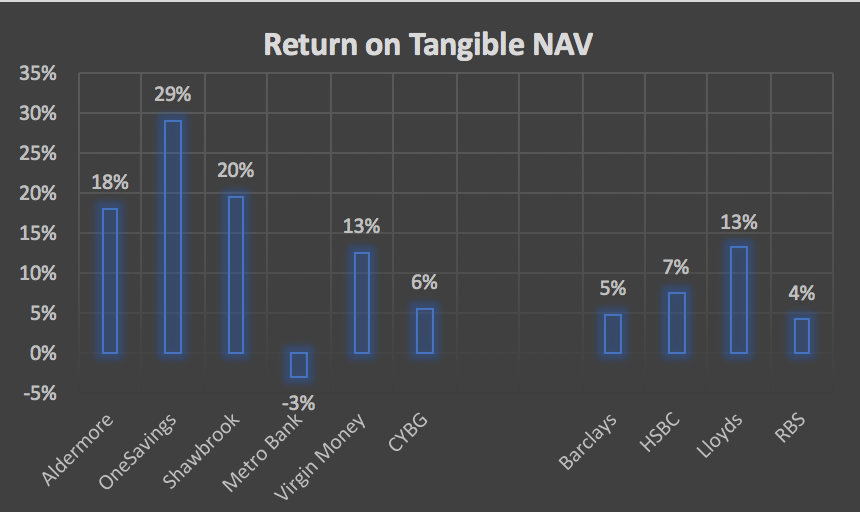 Metro Bank reported a loss in 2016 but is expected to swing to profit in 2017, so its ROTNAV should normalise. However it is operating a similar business model to the big retail banks and CYBG, seeking to compete on customer service, which means large branch network and therefore a structurally higher cost base. I would not expect its ROTNAV to grow much beyond that currently achieved by CYBG.

The other challenger banks are growing their revenues more through the use of intermediaries or their online presence, ie at a much lower capital  cost. This explains the significantly higher ROTNAV which should remain or perhaps grow going forwards.

The sector took a lurch down after the Brexit vote, as did the wider market. However, Metro Bank and OneSavings Bank quickly shrugged off the hit and have both rallied around 60% on a 1-year view. Other peers such as Shawbrook and Aldermore have recovered, but have note pushed on much beyond that. Virgin Money is still down 10% over the last 12 months.

The above chart plots Metro Bank, Shawbrook, OneSavings and Virgin Money against the FTSE All Share (orange line).

Challengers trading at a PE discount to the Big 4

Despite the materially higher growth expectations at the challenger banks and specialist lenders versus the big banks, there is little to differentiate them in terms of PE multiples. In fact the big banks trade at a premium to the challengers. 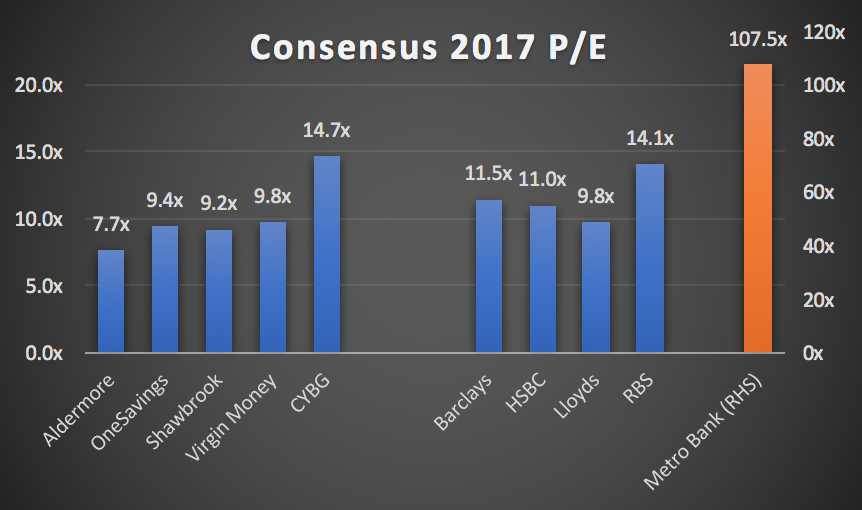 The above chart shows the forecast PE multiples across the main companies we’re discussing, using 2017 consensus EPS forecasts. The Challengers trade on between 7.7x and 10x expected earnings, whereas the big banks trade between 10x and 14x 2017 earnings.

CYBG is on a valuation more akin to the big banks but with over 260 branches, it has a profile more similar to that of the big banks. Metro Bank’s PE is not especially useful at the moment because it was still loss-making in 2016 and is expected to swing to a small profit this year, skewing its PE numbers.

You could argue the discount is justified because of the added risk premium the market attaches to smaller companies, but on the other hand, the profitability and growth prospects would more than offset a higher risk premium. Furthermore, these banks face none of the legacy issues like PPI that the big banks face.

Unlike big banks, the challengers trade above Tangible NAV

The big banks trade below Tangible NAV ranging between 0.7x and 0.9x, with the exception of Lloyds which trades at 1.2x. The challengers trade at between 1x and 2x, except for Metro Bank and OneSavings which trade at much higher premiums of 3.6x and 2.7x respectively, see the chart below. 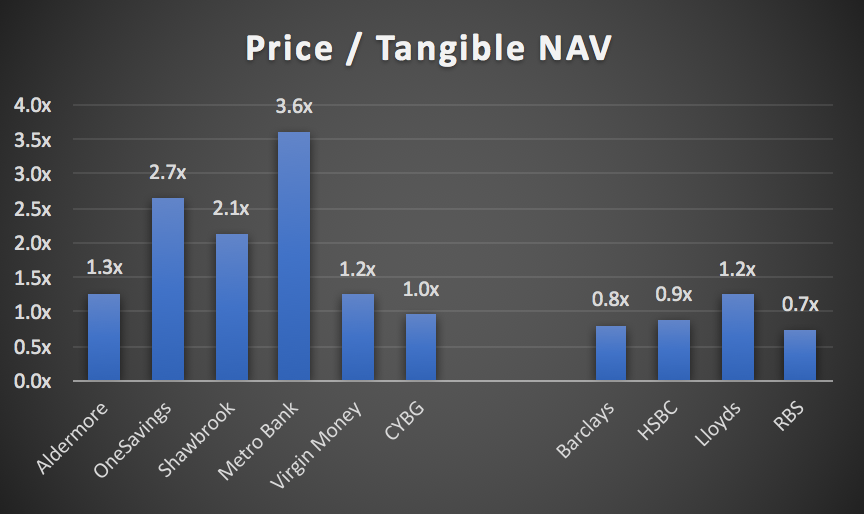 The reason for the premium here could be the growth expectations but it could also be an expectation that all but Virgin Money should over the next few years be able to switch the way they calculate their risk-weighted assets from the “standardised method” to using what’s called “IRB models”. Virgin already does this, and as a result, it needs to hold less capital.

Banking is a sector I’ve always stayed away from, partly because of the difficulty in understanding Banking business models from the outside, and partly because I haven’t found them to be appealing investments. I don’t hold any companies mentioned above but I think the sector is now looking increasingly interesting and worthy of more attention.